The Munda community gets a school 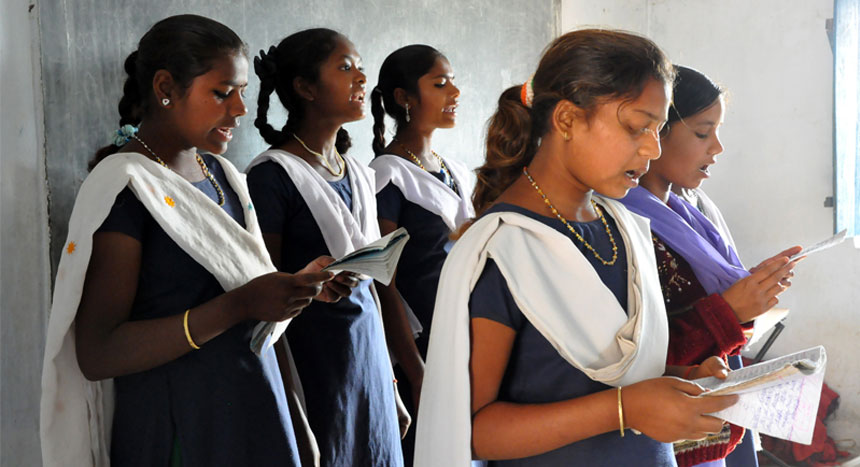 ”Times have changed, and so have we,” sings the Munda community based in one of the districts in Odisha. As darkness descends, a small group of men in their 40s and 50s can be seen heading to a particular destination. This is the home of Laxmidhar, fondly called “Kaka” by the villagers. There are already a few others, including women, huddled before the television in his home. Kaka's TV is the only one in the village and hence the gathering. But there is another good reason. Every evening, with kaka’s help, the group has been learning alphabets and also to sign.

Empowering the Munda community by teaching them to read and write has been his life’s mission, since the time he moved in when the village was not even electrified. Kaka's literacy drive has remained constant, although the electric bulb and television set are now visible.

Not so long ago, the Munda community had no idea what education could do for them. The adults toiled as manual labourers and children went to graze cattle and goats instead of going to school. In case of sickness or medical requirements, reaching hospital was an arduous affair. During the four months of rainy season it was nearly impossible to venture out for work.

When Kaka came to the village he saw their pitiable condition. Since he had some education, he understood that the only way the community could come out of their desperate condition was through education. The first thing Kaka did was to induce the village elders into discussion regarding the various problems the community faced. He involved the youth, instilled self confidence in them and made them realize their potential. He organized the children of the village and helped them to learn alphabets.

Under the government's Adult Education Program Kaka received one slate, one lantern and kerosene. With these resources he started a “Chatasali” (introductory informal school) where both children and adults would come and learn how to read and write.

Suresh, one of the earliest learners in Kaka's Chatasali, and the first one to go to high school, recalls: “Every evening Kaka would teach us to read and write. We would then eat together and sleep in his house. Slowly, we began believing in ourselves. Kaka had ignited our minds.” Another educated young man, Baikuntha, began to teach also. Twelve children continued in the Chatasali till 5th grade and took lessons from him in lieu of a handful of rice per child. However, he got a teaching job elsewhere and left. The Chatasali broke down and the 12 discontinued schooling after 5th grade.

When ASHA, grassroots partner of ChildFund India, started its intervention in the village in 2005 the flames of education that had extinguished in the community were again rekindled. Its workers conducted frequent meetings with mothers, village elders, youth and children. They explained the importance of education and undertook awareness campaigns on health and child rights. ASHA also identified children to provide financial assistance under ChildFund’s program. They revived the Chatsali in the village. Subsequently, ASHA transformed it into a Balwadi center with 26 children between 3–5 years of age. This number gradually increased to 40. ASHA and ChildFund India also started a writing and reading improvement program and a child club with 40 members.

Having taken care of the small children, the Munda community wished for a school in their village. The nearest school was quite far and many children aged 6 – 14 years of age were still out of school. ASHA with support from ChildFund India stepped up its contact programs. Through the child club and WRIP center ASHA imparted knowledge and education on child rights and other social issues such as early marriage, malnutrition and schooling. The members of the child club organized children from the village and held monthly meetings to build their confidence. The members conducted rallies and awareness campaigns in the community. They also met Block Administration to pursue the issue of opening school in their village.

In 2008, the community organized themselves with help from ChildFund and presented their demand before the administration. Although they pursued the matter with concerned officials for almost a year, their case did not move forward. Patience was running out among the community and they prepared for fresh agitation. The process was renewed with ChildFund taking the lead. The community members decided to meet the District Collector. The women too joined the struggle and sat on dharnas (protest). The members of the child club also held protest rallies. The government finally took notice of the struggle in 2011. Soon after, the school was started by admitting 40 children from the village.

The impact of this initiative by the community spread to other parts and as a result girls who were never ever enrolled too wanted to go to school. Girls started going to school and many even went on to finish college.

Udaynath, a former ward member, said, “Earlier, girls going to school was something unheard of. They worked at home or looked after the goats. Now girls are more interested than boys in going to school and have even outnumbered them. All the girls of our village are either in regular schools or in Sevashrams and many of them are getting stipend from the government.”

The community is now effectively monitoring the Mid-Day Meal (MDM), and availability and use of Teaching Learning Materials (TLM) through the School Management Committee (SMC). They ensure regular attendance of teachers. SMC chairman, remarked, “In 2014 two teachers remained absent for nearly 15 days, and the children did not get their meals. We called the education department’s toll free number. The very next day their team visited the school and issued notice to the teachers. Both resumed working on the next day itself and after this incident before the teachers go on leave, they apply to the SMC.”

The villagers are now preparing to initiate the process of starting an Anganwadi (Preschool) center in the adjoining hamlet and a youth club in the village.