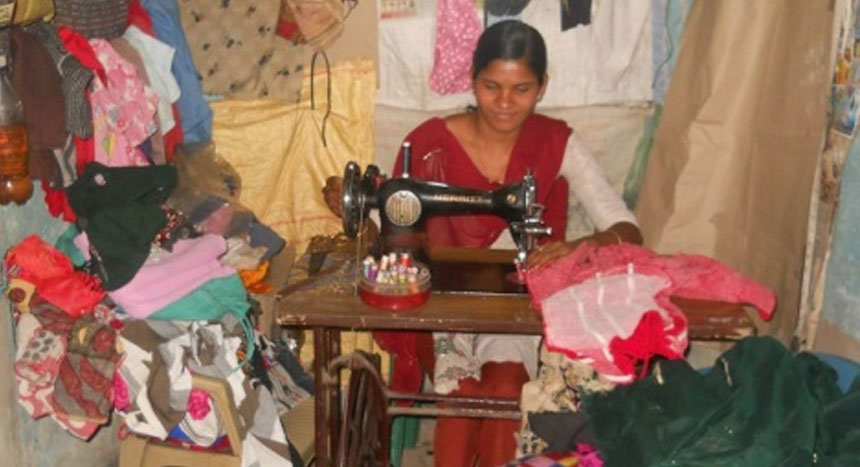 In a small village in Odisha, 26-year-old Sumitra is busy pedaling a whirring sewing machine, giving final touches to a brand new dress for a waiting customer. She is oblivious of the fact that she is physically challenged, one of her legs not fully functional. Behind her frail facade lies a resolute determination to be self-dependent.

A few moments later the happy customer receives her dress and makes the required payment to Sumitra. “She is very efficient and also charges less than other tailors in the market. So we prefer to have our dresses done by her,” she says with a smile.

Sumitra hands over the amount to her mother, who looks on with a smile and blesses her daughter. “My girl has shown everybody that disability does not have to be a barrier and she is in no way inferior to those who are able-bodied. She has changed my world view, our world view. We are all proud of her,” says her mother.

Success for Sumitra is hard earned. Despite of living in poverty, her family had a conservative mindset that did not allow girls to go to school or work.

Her brother was forced to drop out in 8th grade and supplement his father’s meager income from fishing. Her father worked on other people's boats as they did not have enough money to have their own boat or fishing net. Sumitra, then 6 years old, wanted to go to school just like her friends. But her disability came in the way and her father would not allow it. He would say, “Education for you is worthless. What will you do after studying? You cannot walk properly, how will you go to school, and who will take care of you? There is no scope for a disabled person in this world.”

Sumitra remembers, “I wanted to go to school so badly that I would cry my heart out before them but they wouldn't listen. But I did not give up.” Her elder brother adds, “Life was tough for us, money did not come easily. So when she would pester us for school, I would often get annoyed and scold her.”

Her cry was heard when Nilanchal Seva Pratisthan (NSP), ChildFund India’s partner, organized a community meeting in her village and talked about education, health, child rights and ChildFund’s programs. Sumitra was enrolled under ChildFund’s program along with 24 other children. Her parents were still doubtful as many people advised them against taking it but village committee member Meena talked to them and convinced them. Sumitra was admitted to a nearby primary school. NSP-ChildFund gave her all kinds of assistance. She says, “They provided me with a tri-cycle, school bag, books, copies, pen, shoes, dress, free tuition, egg, banana, apple, cheese, and playing material too. I never missed school and from 10th grade they also supported me with Rs. 100 each month for my tuitions.”

As an active member of the child club, Sumitra participated in various activities and worked to promote child rights in her village. She spearheaded rallies and awareness drives regarding girl child education, early marriage and adolescent health. She convinced parents and encouraged many other girls to go to school. She also educated mothers regarding safe hygienic practices and right nutrition for infants and children. In the midst of all this she never lost sight of her aim to be self-dependent. By then she had already decided to earn her living through tailoring and contribute to her family's wellbeing.

In 2007, ChildFund constituted a youth club with 15 members and organized a skill development workshop in the village. This youth club named 'Prerna Yuvak Sangh' opened the doors of opportunity for Sumitra.

She remembers, “When I first attended the various programs of NSP-ChildFund, it felt very good. I became more confident and wanted to help others. It gave me strength to succeed and increased my determination to stand on my own feet.”

She convinced her mother to enroll in the LEEP program and become a member of the Self Help Group, through which she received a small loan for agriculture and irrigation purposes. Later she also received Rs. 12,000 which they used to buy fishing net and a boat of their own. From here their business grew and their economic condition improved. Her brother admits, “Initially I was wrong about my sister. She showed great understanding and maturity and it is because of her that our economic condition has improved.  Now I support her fully.”

After guiding her family to a stable income, Sumitra began thinking of herself. She attended a workshop on career counseling and for six months underwent free training on tailoring at the NSP training institute. In 2011, ChildFund offered her financial assistance to buy a sewing machine. With it she started her own tailoring unit. In 2014, she upgraded herself with a month's training on handicrafts for which NSP again provided support.

Today, Sumitra earns on an average of Rs. 5,000 per month from her tailoring and handicrafts work and she happily contributes to the family income. Savita, who taught her the tailoring work, proudly says, “Sumitra is one of the brightest girls. She is a fast learner. She is different. From day one I knew she would stand out, her determination was visible. Not only did she learn the trade quickly, she also started helping her training mates.”

Sumitra has not stopped at owning her tailoring unit. She has gone on to train other girls of her community. Manju, one of her trainees, says, “Didi (Sumitra) has inspired us a lot. She has fought and won her personal battle. Whenever we require any support she is there for us even at odd hours. She is our role model.”

“Other people in the village also give Sumitra's example to their children. Now other girls who could not complete matriculation are seeking vocational training from NSP so that they too could be like Sumitra.”

Acknowledging her success, Sumitra's mother says, “We were always concerned about her. Today I am happy that she can manage for herself. My daughter has decided not to marry and I respect her decision.” Her father adds, “We thought she would have to depend on us forever, but she has done the opposite. Now she is self-dependent and helping us financially. In a way, we are dependent on her.  I am proud to say that I have kept a piece of land in her name so that she can fulfill her dream to be a successful entrepreneur.”

Sumitra credits NSP-ChildFund for supporting her at every stage.  She says, “I want to show to the world that nothing is impossible. If there is determination even a disabled girl like me can become successful in life and say - Yes I can!”