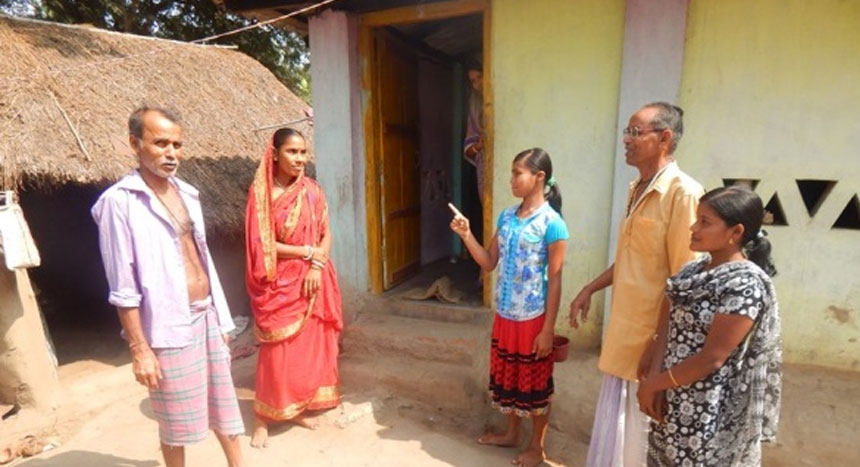 In most villages of Odisha, majority of people work as wage labourers. In the absence of the heads of the households, the children are often neglected, especially in matters of education.

In one of the villages, some village elders wanted to change the decaying state of education as well as turn the attitude of the people towards a progressive vision for the village. They came to hear about the education drive undertaken by a ChildFund’s partner Voluntary Association for Rural Reconstruction and Appropriate Technology (VARRAT). They appealed to VARRAT to also work in their village so that things could change for the better.

They also constituted parents’ committee and Balwadi committee through which eligible children were mobilized. Subsequently, all eligible children between 3-5 years of age started going to the Balwadi. The organization then started a child club by mobilizing 6-14 year olds. It carried out awareness campaigns on health, education, and child rights and motivated parents to send children to school.

The villagers began to understand child rights issues such as immunization, school dropouts, and early marriage. However, they recognized that without the help of elders it would be difficult to realize those rights. The community and the child club met ex-Ward member Mr. Sripati to form a child rights committee. He called for a meeting in the village and all the issues were discussed in detail.

A 15 – member committee was constituted, including different categories of frontline workers, PRI member, school teacher, parents, representative of CBO, youth club and a child club. It was given the responsibility of handling all issues related to children such as early marriage, drop out, child labour, child trafficking, health & hygiene practices, child protection, etc. It was named as Child Well Being Committee (CWBC).

Applauding the efforts of CWBC, Mr. Sripati, an active member of the committee said, “CWBC along with the youth club and child club – are the three pillars of our village. They have collectively instigated several awareness campaigns on health, education and sanitation. On various occasions they have launched awareness drives focusing on child rights and child protection with the support from VARRAT – ChildFund. Due to these ongoing programs all the eligible children of the village have started going to the Anganwadi and school regularly.”

The parents also are beginning to send their adolescent girls to pursue higher education. During cultural and traditional functions in the community, people first seek out the CWBC, youth club and the child club for their views and valuable suggestions. These clubs regularly participate in the decision making process. With their intervention, the village school has been provided with teaching learning materials to enhance the quality of learning. Mid-Day Meal with quality food in the school has become a regular feature.

He further adds, “The three village institutions are rightly taking care of special needs of children. They are consulted while identifying vulnerable families who need financial support. They have successfully influenced the community to press for entitlements from the government.”

Mr. Pravanshu, a member of the CWBC, narrates an incident of active intervention by the CWBC, child club and youth club in preventing forced marriage of a 17-year-old girl in the village. “Owing to enmity between Kajal and Pabana, Kajal conspired to forcibly marry off Pabana’s 17-year-old daughter Sasmita (name changed) with Saheb (name changed) of another village. The villages came to a standstill when the two youth could not be traced. Sasmita’s father wrote to the CWBC for help. It initiated a local search, rescued both and explained to their parents the adverse effects of early marriage. An investigation found Kajal guilty and imposed a fine on all the people who colluded with her. After that no such cases have come to light in the village.”

All the three institutions have also undertaken confidence building activities for adolescent girls. One girl Kabita (name changed) is now a confident young lady. She said, “Earlier I could not really participate and discuss issues in meetings. But once I became an active member of an SHG, I started taking an active part and started to express my opinions frequently.”