“Earlier, we didn’t know about sanitary pads. We used a damp cloth or ash or hay during our periods. The damp cloth would give us rashes and infections but we couldn’t seek help because we were ashamed; we never realized the root cause of the problem. That changed when we got to know about Menstrual Hygiene Management (MHM) through ChildFund’s Garima. We started using pads. Now, during the pandemic since we are not getting sanitary supplies, we are stitching cloth pads using old and clean clothes,” said Meena, an 18-year-old Adivasi (indigenous) girl from a hamlet of 20 families, deep in the Saraiyahat block of Dumka district, in Jharkhand. 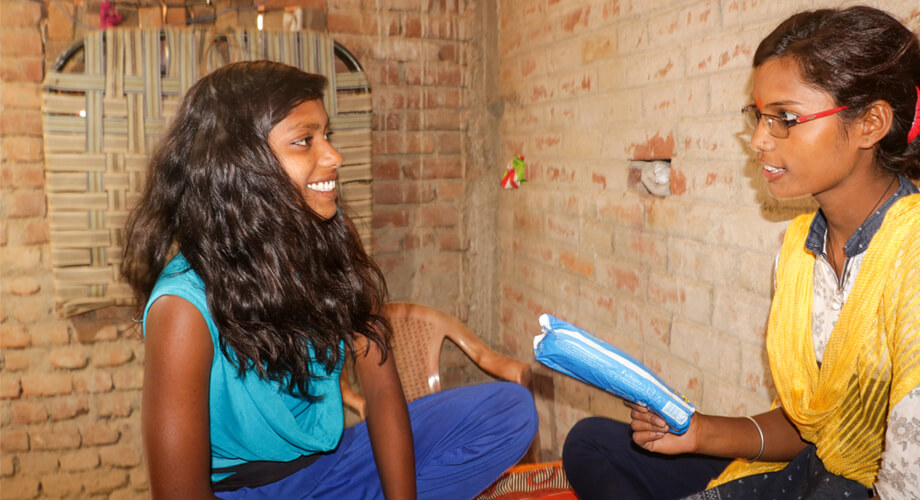 Across India, in the past year, periods didn’t stop for the pandemic but access to period products did, especially for economically-challenged families, as the availability of free and/or affordable sanitary pads from ICDS centers and schools stopped due to their closure in many regions. Period poverty in India is already a sad reality. According to a March 2020 report of the Ministry of Health, a majority of menstruating females in India are largely dependent on unsafe sanitary materials like rags, cloth, hay, sand, and ash as their only alternatives. The use of such methods for a long time can lead to serious health consequences. The pandemic has only exacerbated this issue.

Meena and her friends had only recently started experiencing the freedom from menstruation-related taboos and using sanitary pads when they became part of Garima, ChildFund India’s program focusing on Adolescent Reproductive and Sexual Health (ARSH). And they were not ready to go back to using unhygienic sanitary products. “The ICDS had stopped providing pads due to the pandemic… and a majority of us did not have enough money to buy sanitary napkin,” recalled Meena. She and the other girls of the village discussed this issue at the Adolescent Girls’ Group meeting, a safe-space formed under the Garima, for girls to share their problems, get help, and be linked to several health and counseling services. That’s when it all started – they learned how to make pads via instructional videos on YouTube, collected old, discarded clothes, washed them, and got to work. “We are distributing these pads among the members of the community. Our goal is to help girls of the community cope with the new normal pandemic situation. So, along with my friends, I am conducting regular awareness campaigns on handwashing, hygiene practices, and menstrual hygiene,” informs Meena.

But Meena and her friends weren’t always so empowered. Child marriage, anemia, drop out of girls from schools and avoidable Reproductive Tract Infections (RTIs) such as Leucorrhoea were a few glaring issues that were prevalent in the community. Garima ensures that adolescent boys and girls, gain scientific knowledge about the changes in their bodies, hygiene practices, nutrition during adolescence, reproductive and sexual rights, and various other life-skills so that they lead their life with awareness. Menstrual Hygiene Management (MHM) is an important part of this intervention, too.

After attending one of the MHM sessions, the girls came to know that even though under the Jharkhand government’s initiative, free sanitary pads were distributed to all girls attending government schools, their school, the Government Middle School was not. They demanded that they too get this benefit, and received it.

The conspicuous silence around menstruation and adolescent sexual health has been a household feature of Indian families and communities since forever. Menstruation and menstrual practices continue to face many social, cultural, and religious ostracization. In most families, menstruation is perceived as an unclean or embarrassing thing, extending even to the mention of menstruation both in public and in private. In fact, one study found that almost 70% of surveyed mothers across India, considered menstruation ‘dirty’.

This leaves adolescents feeling confused, subnormal, diseased, or traumatized, and largely uninformed. Schools to remain silent on the subject. A 2015 survey by the Ministry of Education found that in 63% of schools in villages, teachers never discussed menstruation and how to deal with it in a hygienic manner. This silence, along with the cultural and social influences, creates a major hurdle in ensuring that adolescent girls are given proper knowledge on menstrual hygiene.

Jyoti, a 21-year-old woman from a village in West-Singhbhum district, Jharkhand suffered due to this silence. “It affected my life in various ways… the people living in the community were not sensitive enough towards health and hygiene which led to several problems in my life…I would often have infections due to ignorance. These confusions and issues disturbed my studies and I couldn’t focus…I wish that no one should such problems as I did,” she says.

An average of more than 40% of students in India resorts to missing school while menstruating as a consequence of social stigma, isolation, embarrassment and inaccessibility of products. The instances of avoiding school are also ramifications for the lack of proper sanitation facilities across the country. It has been estimated that 1 out of 5 girls drop out of school after they start experiencing the menstrual cycle. Dropping out of school means increased chances of child marriage, early pregnancy, anemia, increased gender disparity and the list goes on.

But can only providing access to sanitary pads increase girls’ chances of a brighter future? Several studies across the globe think not. A famous proverb goes, “Give a man a fish and you feed him for a day. Teach a man to fish, and you feed him for a lifetime.” Similarly, a mere replacement of products will not suffice to ensure dignified menstruation and reproductive health. There is a need for knowledge building to ensure that girls and larger communities are free of archaic and unhygienic behavior patterns.

When they learned about MHM, the girls in Meena’s village were emboldened to follow their dreams and study. They demanded (and received) that their schools have functional toilets that they can use, they encouraged each other for regular check-ups, started having conversations around menstruation with everyone in their community, promoted intake of nutritious food and iron-folic tablets when necessary, and started going to school more regularly. “The program also trained us on decision-making and leadership skills which have helped us unite as an (adolescent) club and take decisions for our wellbeing and rights. We have even stopped many early marriages.”  informs a resolute and hopeful Meena! In Jantalbeda, Jyoti too started speaking about MHM and ARSH. She convinced more than 20 girls in her village to start using sanitary pads instead of cloth and other materials.

Garima also acknowledges that to ensure a long-term behavior change around MHM and ARSH, targeting adolescent girls isn’t enough. Mothers, boys, men, and the community at large need to be included. Mr. Sanjay Ghanju, a government teacher at Government Middle School, Shemarsoth, a village in the Latehar district of Jharkhand, loses many of his female students to child marriages who become adolescent mothers, but he has seen a shift in behavior ever since, under Garima, he started conducting discussions around sexual and reproductive health, menstruation and hygiene. “As a teacher, I want that all the children should get equal education, irrespective of Gender. Since I have started holding monthly discussion clubs on ARSH and MHM at my school, I have seen that girls have become more confident, and an increase in female attendance. The instances of child marriages have also reduced in our village.”

Abhay is an 18-year-old boy from Garhwa District, in Jharkhand. Like many others, he too was unaware of the changes in boys and girls during puberty. However, when he saw that his cousin suffer a RTI without help due to the taboos attached to menstruation. “The infection became worse over time before we got her help.” He decided this needed to change, and he became part of Garima, “I don’t want other girls in the community to suffer from hygiene issues,” states Abhay. When he developed a scientific understanding of adolescence, he first spoke to his cousin and convinced her to shift to sanitary pads. Next, spoke to his mother and said, he wanted to talk to more people in the community and school about it.

Today, under Garima, Abhay is a peer educator who informs his peers, links them to necessary resources, and promotes a healthy and hygienic lifestyle. He is a trusted friend who helps curious, confused, and uninformed peers in his community gain knowledge and counseling. He says, “Boys ask me about changes such as voice change, hair growth on the face and private parts, attraction, night-falls, etc. I listen to their problems and explain to them that these changes happen because of secrecy of hormones and that they are normal changes which help us grow towards adulthood.” He advises boys and girls to follow nutritious diets and promotes MHM, iron-folic tablets, and sanitary pads to girls while encouraging them to talk about menstruation to their families and friends. “I want that my community’s future generations are free of blind, unscientific practices so that they can keep them safe from infection caused due to unhygienic practices.”

Upendra, a 19-year-old peer educator from Latehar district in Jharkhand dreams of a day that all the girls and boys in his community are equals and children and adolescents aren’t victims of archaic knowledge and misconceptions. He says, “For equality, we need to intervene on all fronts. More and more boys, girls, and community members need to come together to share information about ARSH and menstruation among the community. We are the real change agent to fight this issue.”

Just like the Meenas, Jyotis, Sanjays, Abhays, and Upendras of Jharkhand, Garima aims to create an army of change-makers work across districts in 15 states of India so that adolescents can lead a dignified and healthy life where they can make informed decisions.

This blog is part of the #LetsTalkPeriods campaign by ChildFund India. Between the National Girl Child Day, January 24, 2021, and the Sexual and Reproductive Health Awareness Day, February 12, 2021, join us on our Facebook, Instagram, Twitter, and LinkedIn to celebrate #StoriesofChange from across the country, featuring people who are working with Garima towards ensuring that all adolescents have dignity and empowerment for better menstrual, sexual and reproductive health.